Today was a hike from around Carlisle to Duncannon, PA of a distance around 18.5 miles.

Last night I was so tired I think I was lucky to get 4 hours of sleep. That is one of my reactions to being overtired.

The first part of the day was very flat. The second part had a few more hills and rocks, but some nice fields too. I felt like I was dragging a dead cow with me all day. The math shows I did my usually pace, the facts are the facts but I know what my experience was like.

For a number of miles, I could not drink any of the water as it was too contaminated from agricultural runoff. Further north the trail passes by a federal Superfund site where the water is not drinkable either. This too is a part of America and the trail. I don’t accept this as the way things have to be, but I will save my soapboxing for later.

Passed by Cove Mountain Shelter for lunch. It had a fun sign on it I thought I would share. I party everywhere. Haha

I also had a nice view of Duncanon from the ridge.

When I came into town I stopped at the 100 year old Doyle Hotel for a burger, it was good but I had to force it down. I ate today, but not very much. Also, had a bought of diarrhea for most of the day. I don’t mention that for humor, but as a fact of reality. I am well hydrated, but that situation can get you into trouble in the woods if you cannot maintain hydration. Just bring real, it’s not all romantic visions out here. I dare you to sleep tonight without dreaming about this…haha..sorry. 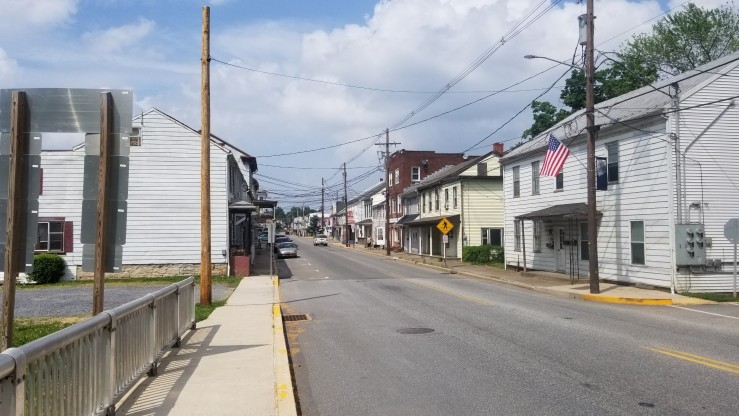 At the Doyle I was talking with the owner and some locals. Also a thru hiker named Pete who is a paramedic. We talked about my lack of appetite over the last two weeks, he was not concerned as long as I am hydrated like I am. He said he sometimes goes through the same thing on long hikes.

I am taking a few days off in Duncannon to rest at Red Carpet Inn. Some storms are scattered around, so good timing. The hotel used to be the last stop back in the day for hunters and trappers to enter the wilderness. This town used to have heavy industry and garment manufacturing when it was booming, times are sure different here. The people are being great to me here.